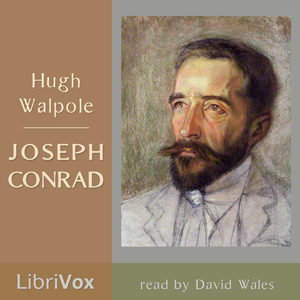 Read in English by David Wales.

This is a literary biography of Joseph Conrad (1857 – 1924) who is regarded as one of the greatest novelists in English. He was granted British nationality in 1886, but always considered himself a Pole. Though he did not speak English fluently until he was in his twenties (and always with a marked accent), he was a master prose stylist who brought a distinctly non-English sensibility into English literature. He wrote stories and novels, many with a nautical setting, that depict trials of the human spirit.
Sir Hugh Seymour Walpole, CBE (1884 – 1941) was an English novelist. He was the son of an Anglican clergyman, intended for a career in the church but drawn instead to writing. Among those who encouraged him were the authors Henry James and Arnold Bennett. His skill at scene-setting, vivid plots, and high profile as a lecturer brought him a large readership in the United Kingdom and North America. He was a best-selling author in the 1920s and 1930s, but has been largely neglected since his death.... Joseph Conrad said of him, "We see Mr. Walpole grappling with the truth of things spiritual and material with his characteristic earnestness, and we can discern the characteristics of this acute and sympathetic explorer of human nature." - Summary by wikipedia and david wales

Uploaded by librivoxbooks on August 16, 2015